I have spent far too long thinking of the answer to this question, and I don’t think there’s a singular answer that I can give.

The immediate answer that jumped into my head was Prompto, from Final Fantasy XV, but that’s probably because I’ve been in FFXV hell ever since I started the game back in December and there’s been little else that’s run through my head since. Prompto is the best of the chocobros, the one who makes me laugh the most, the one who I feel I relate to the most and the DLC I’m most looking forward to.

Thinking further back, I would also cite Chiaki Nanami from Danganronpa 2 as one of my favourite characters. On a personal level, I relate to her a lot; any character that’s socially inept and obsessed with video games resonates a lot with me (see also: Kozume Kenma from Haikyuu!!). She’s a key part of Danganronpa 2, and the game would be much poorer without her in it. I’ve even cosplayed her in the past! 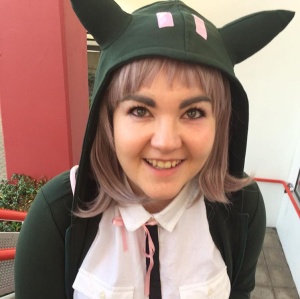 Going back a bit further in time, I’d probably give Crash Bandicoot the title of my favourite character, purely for nostalgic reasons. There’s nothing relatable about him, but I have the greatest memories of playing as him in games, so he has to get some recognition somehow!