My first anime crush was back in the days before I even knew what anime was, watching Pokémon. I don’t quite know why, as he’s definitely not my type of character now, but I really loved James when I was younger! 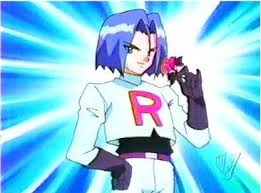 If we count Pokémon as my first anime, then my first anime crush when I consciouly knew what anime was came about during my third anime, Attack on Titan. Levi is definitely my type of character, and probably the reason I like most characters I do like. Whilst I don’t like James much, I still love Levi and he’s probably one of my favourite Attack on Titan characters.