And so, as predicted, my July YumeTwins box arrived in record time. Typical! At least this means it’s safe to order new subscription boxes, something I’d been putting off doing whilst the post was so unreliable! 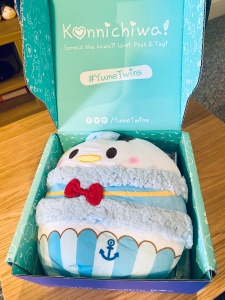 The theme of July’s box was ‘Work kawaii, play kawaii’! I did feel like the items in this box didn’t really fit the theme, and it did seem like just a bunch of random items put together. One of the items, the ‘mystery plushie’, just felt like it was in there to get rid of stock.

As you can see from the photo, the ‘mystery plushie’ was very prevalant in my box – Donald Duck staring at me as soon as I opened it. 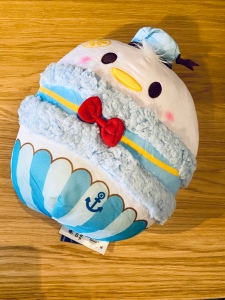 I’m not the biggest Disney fan, I would have much rather had a Sanrio plushie, so immediately I was feeling a bit miffed. This is potentially one item I’ll be selling as I don’t really see a space for it in my plushie collection, but we’ll see. It might grow on me. 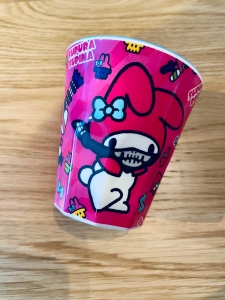 My next item was a Splatoon x Sanrio cup. I’m not a fan of Splatoon, having never played, but obviously I do like Sanrio. I’m not sure where My Melody rates in my Sanrio league chart, obviously I would have preferred a Pom Pom Purin one, but this isn’t so bad really. I like pink at least!

I also got the above, which, though very cute, I have no idea how it fits with the work/play theme. It’s billed as a ‘pocket surprise towel’. I think the character is Tokage from Sumikko Gurashi (feel free to correct me in the comments!), which I don’t feel strongly about either way, but it is pretty cute so I’m not too bummed out about it (though, again, Pom Pom Purin was an option, so sucks to be me I guess).

Finally, this Gudetama mousemat. Probably the only thing in the box that fits the theme. It’s pretty practical too, as now I’m working from home I do use a plug-in mouse for my work laptop, so I’ll definitely get use out of it. Again, the options were Gudetama or My Melody, and out of the two I definitely would have preferred My Melody, which is pretty typical of my items in this box.

What did you think of the items in this box? Do you think they fit the theme?