Historically I’ve been pretty rubbish at starting a bunch of seasonal shows and actually keeping up with them but I actually managed to do it for Winter 2020 with the few shows I watched. If I’m anything it’s a person who doesn’t do things by halves or learn from past mistakes, so I’ve gone through the seasonal shows for the rest of the Winter season (Winter part 2?), picked out what I want to watch, cried at how many there are, and wished myself luck keeping up with them all. I thought I’d write up a little preview with my thoughts of the first episode of each, so here you are! I’ll try to avoid going over the plot, because I think with some things you want to find out for yourselves.

An anime about a boys high school volleyball team? It’ll never work… It’s so difficult to watch 2.43 without comparing it to Haikyuu!!, but once the initial weirdness wore off, I actually really enjoyed the first episode. The tone of 2.43 is totally different to that of Haikyuu!!, it’s still serious and feels fun, but seems to have a slightly more adult tone, with some quite heavy story being introduced straight away. The main characters, Chika and Yuni, both seem interesting at first meeting and I’m intruiged to see how they can develop.

I don’t have super strong feelings about this anime, but it seems pleasant enough and has made me laugh a few times! I like the characters, and I’m interested to see if it goes where I think it’s going or if it’s going to take not quite such a predictable route. 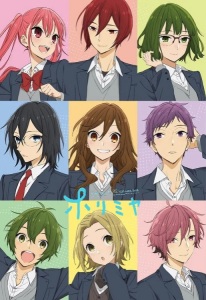 Horimiya feels like a really cute love story from the first episode. It seems like both of the main characters, Hori and Miyamura, both have feelings for each other, so I’m interested to see where that goes as more outside influences are introduced. The animation in the show is impeccable, such high quality it almost seems like it belongs in a movie. Both Hori and Miyamura are really interesting and likeable characters, and there seems to be a pretty large supporting cast waiting to be introduced if the promo image and first episode are anything to go by. I’m looking forward to this one!

I love me a supernatural type folklore anime, I think it’s so interesting to see folklore tales from other countries. I really enjoyed the first episode of Kemono Jihen, I thought it was really mysterious and exciting, and I hope it explores more of a detective side of things in future episodes.

I’m not really sure on Otherside Picnic at the moment. I really like the animation, but there didn’t feel like enough focus on the characters for me to get attached to either of them, or really care about the situation. I hope this changes for future episodes, because the premise seems really interesting so far and I think it could have a lot of potential!

Scar on the Praeter 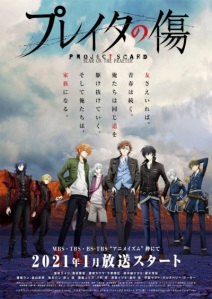 This show had so much exposition in the first episode, it felt really busy and chaotic. I think this also has a lot of potential, but I really hope they don’t cram too much in and slow down a bit from the first episode, as I know it’s only a 13 episode arc. I’m hoping that the first episode was just a lot of set-up and that going forward it might be a lot clearer, so we shall see! 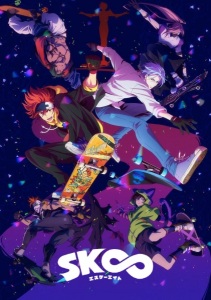 I really loved the first episode of SK8 the Infinity! I felt like it did a really good job of establishing the world, and the characters, and it was really energetic and fun. It was so colourful and vibrant too, it had me hooked on the first episode! 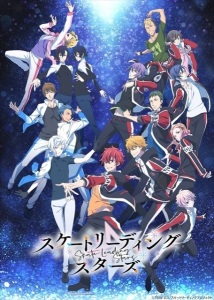 Any anime wanting to focus on figure skating has a hard job ahead of it after the success of Yuri on Ice!, but I think Skate-Leading Stars does a good job of stepping away from the traditional figure skating perceptions but introducing a new concept in skate leading. I love sports anime anyway, and I’m definitely spoiled for it this season. Skate-Leading Stars worries me somewhat because I think it’s quite hard to create a convincing concept for a sport you’re inventing for the purposes of a show, but hopefully the characterisation and the concept is strong enough to pull through! It certainly seems like it so far, but whether they can maintain that through the season remains to be seen!

I haven’t watched that many isekai anime, I think really only Rising of the Shield Hero in fact, and Sword Art Online if that counts. It’s just not a genre that overly appeals to me, but the promo picture for this looked cool and the concept was interesting; a 34 year old recluse is killed and reincarnated in another world as a baby named Rudy, who then grows up and learns magic and decides to live the life he always wanted in his previous life. If I’m honest, I’m not sure how long I’ll stick with this. For the most part it is pretty cool, I really like the concept and seeing Rudy learning magic and it’s kind of fun to see his inner thoughts which have retained the memories of his previous life and the actions of him as a child. My issue is it’s so crude. I’m not a prude by any means, I’ve watched my fair share of ecchi, but this just rubbed me up the wrong way. One of the first things Rudy does is internally comment on how big his mothers boobs are and makes an remark about looking forward to breastfeeding. There’s also a comment later Rudy’s internal voice makes later on about wondering if another character has reached puberty yet in a really crude manner. I’m uncertain how long I can stick this one for, but I’ll see how I go!

As I stated in my IDOLiSH7 review, I’ve got really into idol music and IDOLiSH7 has opened the way for me for idol anime. I-Chu seems pretty generic so far, it was enjoyable enough but nothing really stood out to me in the show in terms of characters or concept.