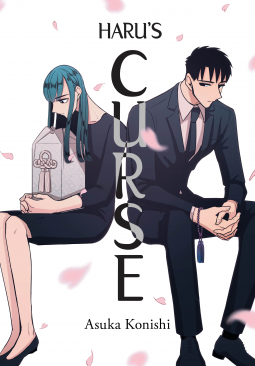 Thank you to the publisher and NetGalley for a free e-copy of this manga in exchange for an honest review. All opinions are my own.

Haru’s Curse is the story of Natsumi following the death of her sister, Haru. Natsumi believes that she will be cursed by Haru because following her funeral, she has started dating Haru’s fiancé, Togo. Natsumi agrees to date Togo on the condition that she wants him to only take her to places that he took Haru, so she can feel closer to Haru after her passing.

Though the manga starts with Haru’s funeral, there are a lot of flashbacks to events prior to the funeral which really help establish the relationships between Haru, Natsumi and Togo. I really liked the change between past and present day, and I felt it worked especially well to show the contrast between Togo and his relationship with each of the sisters.

Haru’s Curse is a very real and raw portrayal of death and grief. As a reader, you see a lot of Natsumi and Togo struggling with their own feelings about Haru’s death, as well as their extended families. Haru’s Curse doesn’t shy away from a serious subject matter, with many serious and often dark subject matters touched on, but in a very respectful way.

As expected, there are a lot of hurdles throughout Haru’s Curse. Not only do Natsumi and Togo have to wrestle with their own guilt and emotions surrounding Haru’s death, but there are also a lot of outside influences interfering in their relationship and

The characters of Natsumi and Togo feel incredibly nuanced, whilst also feeling very realistic. Natsumi is hardworking, excitable and cheerful, but to Togo she seems the total opposite. Togo, who comes from a prestigious family, has his whole life mapped out for him according to his family traditions and expectations. As Natsumi and Togo’s relationship develops, the reader beings to see the effect they each have on each other and how they each change as a result of their relationship.

What I really liked about Haru’s Curse is that characters actually talk to each other. I’ve read a lot of manga where miscommunication is key, or characters bottle things up, but in this there is none of that. This helps all of the characters feel a lot more like the adults they are meant to be, and also a lot more realistic – this is what real people do after all! Well… for the most part anyway.

There’s a lot to like about Haru’s Curse, and it poses really interesting questions about how to honour the dead and how to move on after the death of a loved one. Haru’s Curse does seem to go too far at times – I did feel like it could have been left that Natsumi and Haru’s relationship was just sisterly, but the manga edges slightly further this and Natsumi declares at points that she was in love with Haru. Fortunately, this isn’t really a main area of focus and you can easily move past it and focus on the many great parts of Haru’s Curse.

NetGalley requires users to rate on a star rating of 5, so I have adjusted my star ratings for any reviews for manga reviewed via NetGalley. Non-NetGalley reviews will remain out of 10.