Your teenage years are undoubtedly some of the hardest years of your life. Raging hormones, school, navigating romance for the first time, aliens threatening to destroy your home and family… Now, imagine all of that in a timeloop that you’re destined to repeat over and over, and you have I Was A Teenage Exocolonist.

Landing itself somewhere between a twin-stick shooter and a rhythm game, Soundfall feels like it’s not really doing one or other of these particularly successfully. Saved by an incredible soundtrack, Soundfall has the potential to be a really incredible game with an exciting concept, but is let down by repetitive gameplay and a weak story.

Originally released on PC in 2019 for the original game’s fifth anniversary, the acclaimed survival game This War Of Mine: Final Cut has been repackaged in a for new-gen consoles. Hitting PS5s with remastered versions of the original and DLC locations, This War of Mine gives a harrowing and to the point view of war from the perspective of civilians trying to survive. 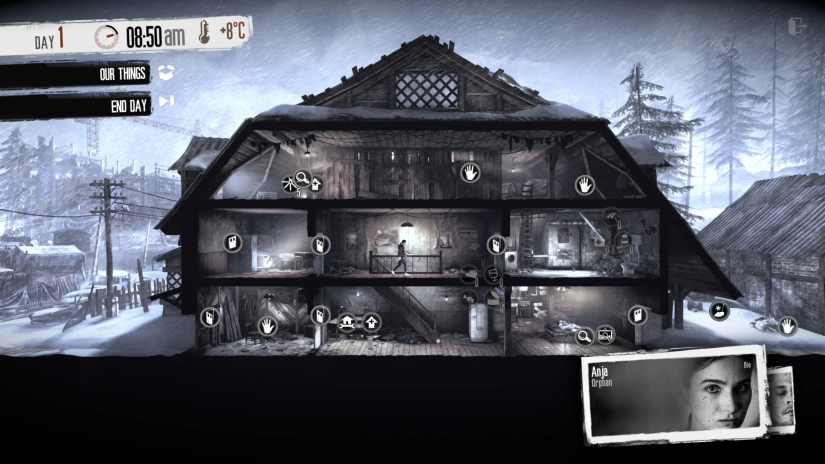 Set in the fictional city of Pogoren in the equally fictional Graznavia, This War of Mine has two cycles within which players must navigate a cast of characters. During the day, the characters will be at their shelter, and activities are based around daily survival: making improvements to the shelter, ensuring everyone is fed — you can even teach children basic survival skills. You can also craft items ready for trading with travelling tradesmen or people you may bump into while scavenging yourself. At night, the characters are split up – one person can go scavenging in local areas to find supplies, or you can have them stay home and guard the shelter from other scavengers or rest for the next day.

A character becoming trapped in a VR MMORPG isn’t new ground. It’s been done plenty of times before in anime, manga, and video games. You name it. We’ve seen it. For a new title to come into this genre, it has to really give something special to stand out – can Death End re;Quest deliver on that front?

Adol Christin is back, and this time he’s… in prison?! In the newest entry in the Ys series, Ys IX: Monstrum Nox, the follow-up to the well-received Ys VIII: Lacrimosa of Dana, Adol sets on a new adventure. After a series of unfortunate events, he begins investigating supernatural events in his new surroundings.

One of the most commonly seen criticisms of detective games is that they want to point the player towards one specific answer with a specific piece of evidence to corroborate. Not only is this frustrating, but also forces you to think the exact way the game wants you to think, leaving no other interpretation. Paradise Killer takes this criticism and throws it out. Created in 2020, the first person open-world detective game lets you gather as much—or as little—evidence as you like, and come to your own conclusions about them. The only person you have to convince is the Judge.

Originally released on PC back in 2011, To The Moon was created by Kan Gao using the RPG Maker XP toolkit based on his own experiences with his grandfather’s life-threatening condition, and influenced by his own questions about end-of-life thoughts and whether a person can live with their regrets. Fast forward 9 years and one rebuild on Unity, and To The Moon was released on Switch in early 2020, ready to be enjoyed by a new generation.

Norah is ill, and her husband Harry is missing after having gone searching the world for a cure. After receiving a mysterious package, Norah decides to go to the place Harry was last known to be — an island off the coast of Tahiti. Call of the Sea bills itself as a Lovecraftian mystery game, and whilst the first person adventure puzzler is clearly influenced by the writer’s work, it falls short on the mystery front.

Kaze and the Wild Masks is a 2D platformer described by developers PixelHive as ’90s inspired’. This is definitely accurate, as there’s a majorly nostalgic vibe, from the slightly retro feeling artwork and music to the lack of dialogue. It simultaneously feels years old and brand new.

Just two years after her first game, Reisalin “Ryza” Stout is back with Atelier Ryza 2: Lost Legends & the Secret Fairy. This time, she’s on an adventure from her home of Kurken Island and has travelled to Asha-Am-Baird to investigate mysteries surrounding some ruins while reuniting with some familiar faces.

Atelier Ryza 2 hits the ground running, straight into the thick of things with its mystery heavy plot and into the dungeon exploration the series is loved for. It’s not strictly necessary to have played Ryza’s first outing to make sense of this offering, but certainly those who have will get a kick out of seeing returning characters and referenced events.