Story and art: Shinichi Fukuda
Genre: Ecchi, Romance, Slice of Life
Publisher: Square Enix Manga
Synopsis: A high school boy with a passion for traditional dolls and a talent for sewing gets roped into making cosplay outfits for one of the prettiest, most popular girls in his class! As the odd couple grows ever closer, they find themselves in ever racier situations! 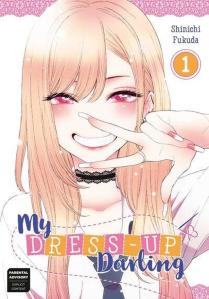 Whilst browsing for new manga to buy, I stumbled across My Dress-Up Darling. I have a weird thing about not wanting to read too much manga that has been adapted into anime, I can’t even explain this hangup, and My Dress-Up Darling looked really cute from the front cover, and it was a story about a cosplayer! Much more relatable to me than anything else I could have picked.

I thought I was in for something cute and wholesome, and whilst not entirely wrong, I was quite surprised when the manga arrived and it was wrapped in celophane. Always a dead giveaway. I then spotted the Parental Advisory warning, and wondered what I’d got myself into. Clearly, I have a problem reading product descriptions properly.

Wakana is a boy who is interested in traditional Japanese hina dolls, and having been teased about it as a child, he is very sensitive about his interests which are generally perceived as feminine. His classmate Marin is a popular and beautiful girl, who is unashamedly open about her interests in anime. Marin catches Wakana using a sewing machine at school, making clothes for his hina dolls. It’s not long before she recruits him to making her cosplay for her current obsession; a character from Saint Slippery’s Academy for Girls – The Young Ladies of the Humiliation Club: Debauched Miracle Life 2 (what a title), which is an eroge (an erotic videogame for the uninitiated), so it’s here where the Parental Advisory warning really comes into play.

Wakana and Marin are polar opposites, and it’s so nice to see the beginnings of their relationship. Wakana is a very sweet, innocent boy, and Marin seems pretty worldly, though admittedly we don’t know much about her from the first volume. Marin helps Wakana accept that it’s okay to accept your interests and that there’s nothing wrong with liking what you like, which is really refreshing and I wish I had someone tell me that when I was growing up.

The basis of Wakana and Marin’s relationship is really interesting, and it does seem on the face of it that Wakana is giving a lot and Marin is taking, so I’m interested to see how it develops and how things balance out.

I also really enjoyed all the cosplay references, naturally. My Dress-Up Darling is actually surprisingly in depth about cosplay, talking a lot about things like patterning outfits, fabric choices and wigs. It’s actually a relief as it would have taken me out of it a lot if it had been inaccurate.

Of all the manga I’ve accidentally bought, My Dress-Up Darling is up there as one of my favourites.

Story and art: Yuhki Kamatani
Genre: Drama, Psychological, Slice of Life
Publisher: Seven Seas Entertainment
Synopsis: Not only is high schooler Tasuku Kaname the new kid in town, he is also terrified that he has been outed as gay. Just as he’s contemplating doing the unthinkable, Tasuku meets a mysterious woman who leads him to a group of people dealing with problems not so different from his own. In this realistic, heartfelt depiction of LGBT+ characters from different backgrounds finding their place in the world, a search for inner peace proves to be the most universal experience of all.

This review is of the full four volumes, despite image above being for the first volume.

The opening pages of Our Dreams at Dusk are pretty hard to read. Tasuku Kaname’s classmates discover he is gay, and as a result he considers suicide, believing that his life is over now his secret is out. Whilst Tasuku contemplates his fate, he sees a woman who appears to jump over a railing to her own death. Tasuku runs to the location to assist the woman, and finds Someone-san alive and well. Someone-san tells Tasuku to talk about his problems, but she won’t listen if he does.

Following Someone-san to a drop-in centre, Tasuku meets other members of the LGBT+ community and becomes involved in a restoration project rennovating an old house. As Tasuku develops relationships with the other characters, he is brought back from the brink and often remarks that he’s glad he didn’t end his life.

At it’s heart Our Dreams at Dusk has a really endearing story which made me feel a lot of things. For the past couple of years I’ve struggled with my own identity and labels, as have many of the characters in Our Dreams at Dusk. There’s a lot of focus in Our Dreams at Dusk on accepting yourself as who you are, and not getting caught up with labels or opinions of others, and it’s really refreshing to see in a manga, and resonated a lot with me and gave me a lot of food for thought. As Tasuku himself says “I think not knowing is okay. There’s nothing weird about that.”

Tasuku develops really well throughout the manga, and it’s really fulfilling to see how he grows and changes, becoming more confident in himself and about his own feelings. With the help of the supporting cast, Tasuku explores what it is to be a member of the LGBT+ community, and gradually accepts himself.

Sometimes it does feel like Our Dreams At Dusk has a character for every LGBT+ label, almost as if the mangaka used a checklist to make sure everyone was represented, and as a result it does sometimes feel a bit performative, but nonetheless it’s still really encouraging to see minorities represented in a respectful way.

Something to be aware of when reading this manga is that there are a lot of anti-LGBT slurs used. If you’re sensitive to that kind of language, then please go in knowing that. The language isn’t used gratuitously, and ultimately does serve a purpose within the context of the story.