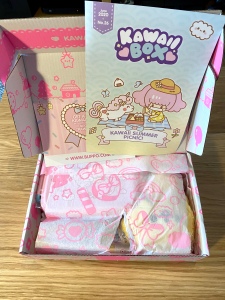 Until this box arrived, I had entirely forgotten that I’d bought a KawaiiBox subscription for June. This was my first KawaiiBox, and the theme was ‘Kawaii Summer Picnic’! I was a little apprehensive when it arrived, as the box was quite small – but, the best things come in small packages as they say, and I was proven wrong to be so concerned! When I opened it, I was immediately happy as it was presented really nicely (it doesn’t take much to impress me, it turns out), with tissue paper and a cute pamphlet.

My first item was this super cute bento box! I’m getting quite the collection of bento boxes now, but they’re always handy. In normal times I use them to take breakfast, lunch and snacks to work, but at the moment they’re just in the cupboard waiting to be used!

Next up was these chopsticks in my signature colour, pink! Luckily, I’m pretty adept with chopsticks these days, so I’ll be using them to show off when I have takeout!

Keeping on the food theme, in the box there was also these Little Twin Stars onigiri covers. I’ve not made any Japanese food at home before, but getting these has inspired me to try! 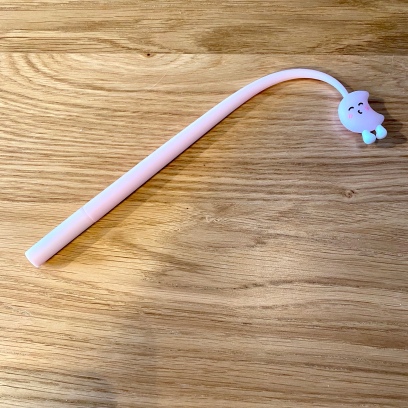 There was also some cute stationary in the box! Some paper sticky tabs, which I’m sure will come in handy at some point, these sorts of things always do! The stickers I’m going to save for when I make my next scrapbook, whenever that will be! I’m thinking of taking a leaf out of Chelsie’s (scrap)book and making one for my next holiday, whenever that will be! The next item was a pen, with a cute moon on the end! It’s a really cool pen, and nice to write with, so that’s a bonus!

We got sweeties in our boxes too! These were peach flavour, which is one of my favourite flavours, but unfortunately, I couldn’t eat them as they contained gelatine, so I gave them to my parents to share. Their verdict was “weird”, I think in so far as the texture, rather than the flavour.

Finally, the loot box Gods smiled on me, and I got a plushie of my favourite Sanrio character, Pompompurin! He’s so cute and fluffy!

I was really happy with my KawaiiBox! For a purchase I’d totally forgotten about, there were a lot of really cool items which I’m happy to own! Especially the Pompompurin plushie!