Hypnosis Microphone is a Japanese multimedia project spanning drama CDs, music, mobile games, manga, stage plays, and is soon to be adapted into an anime. If you’re here for an overview of Hypnosis Microphone lore, or a breakdown of characters, then you are in the wrong place. I don’t fully have a grasp on that myself. 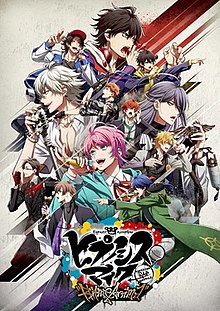 I discovered Hypnosis Microphone as one of the songs popped up on my weekly Apple Music ‘For You’ playlist, and I liked it. I questioned a friend who loves idols, v-idols and the like, and they advised me not to even attempt getting into the background of it all, and to wait for the anime, saying it was a messy and complicated road that lay ahead of me. So that’s what I did. I know a vague background of the plot from quick Google searches, so I have some kind of idea what it’s about – women rule politics (as it should be), and men fight through rap battles. Brief, to the point, and probably missing a lot of important information.

I don’t think it’s an understatement to say Hypnosis Microphone has been the theme of my pandemic. I was getting into it just before my (cancelled) trip to Japan, and since the lockdown started my obsession has multiplied. I couldn’t have picked a better time to get into the franchise. I’ve done nothing but listen to Hypnosis Microphone the last 6 months or so, and it’s catapulted into my heavy rotation. It’s also launched a whole genre of music on me – my recommendations are full of similar, v-idol/j-idol music, and I’m totally embracing it.

Down below are links to some of my favourite Hypnosis Microphone songs, to get us all in the spirit for the release of the anime. I’ve included one ensemble song and one song from each of the main units, and have tried to limit it to a few songs. Honestly, it’s one of those things I could get totally carried away with as the songs are incredible, but I didn’t want it to be a link dump. Sorry it’s just links, I couldn’t embed videos for whatever reason!

Break the Wall (Buster Bros) (I could only find the trailer for this!)

The Champion (Matenro) (I could only find the trailer for this too, boo!)