Tokyo Ghoul is one of my favourite anime, so when I saw that a cinema near me was doing a screening of the release of the live action film, I jumped at the chance to get tickets.

In all, I really enjoyed the movie. It’s not perfect by a long stretch, but it’s a really good adaptation of the anime and manga, and stuck faithfully to its predecessors. There weren’t really any moments I could nail down where I could comfortably say “It didn’t happen like that in the anime/manga”, and trust me, I’m always the first one to point out that sort of thing.

Tokyo Ghoul is let down by some of it’s not-so-special effects. So much of the plot is reliant on CGI, so it’s really disappointing that the CGI was so subpar. It really took me out of it seeing the ghouls fighting using their kagunes which were just laughably bad. Really, I think this is the only negative I can say about the whole experience.

The movie does showcase some really stellar acting. Masataka Kubota in particular was especially convincing as Ken Kaneki, managing to show off his inner turmoil at becoming a ghoul. There are some really great moments later on in the movie where Ken is being overtaken by his ghoul side where you can really feel how the experience is affecting him and how troubled his mind is.

Downsizing is a peculiar one. I think it’s really hard to make a ‘serious film’ where the key concept of the movie is that people are shrinking themselves. I don’t know if that’s because I was a child in a time where Honey, I Shrunk The Kids and its various spin-offs were a big thing, but to me the idea of a person shrinking is just funny. 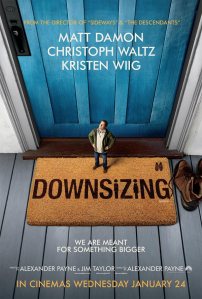 The thing with Downsizing, though it does have its funny moments, is it’s not really a comedy. The concept of ‘downsizing’ is so that a person takes up less space on the planet and has less of an effect on the environment, so the movie is a pretty serious one with a focus on environmentalism and the selfishness of humanity.

Downsizing doesn’t really deliver its message with much impact. Yes, we all know that the Earth is struggling to cope with the volume of people who inhabit it, as well as the way they treat it. Past this it doesn’t really offer much more exploration into things. There’s no focus on how things change once the project begins, how things are developing or whether the project met its aims. Things just happen, and we’re expected to accept that.

Downsizing touches on a lot of points that would have been really interesting to explore; the import/export business in the miniature world, the wealth divide in Leisure Land, politics between the ‘normies’ and the downsizers to name a few examples, but it doesn’t expand on any of them. It’s disappointing, but throughout the movie Downsizing has a habit of introducing an interesting topic and just leaving it, undeveloped.

The protagonist, Paul (Matt Damon) doesn’t really develop much, and the same can be said for most of the characters. Everyone ends the movie as they started, there’s no journey, no development, nothing to keep you engaged and the movie feels every second of its 2hr15 runtime.