Collecting up everything for this post, it looks like I had a sensible month. My bank balance would say otherwise, but I think that’s mostly due to paying for preorders and I bought a lot of stationery which I’ve already talked about in previous posts. 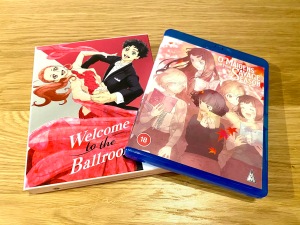 We’ll kick off with my new anime additions. If you remember back to the Anime Limited mystery box I got, in the box was Welcome to the Ballroom part 1. You’ll all know by now, I can’t leave a collection unfinished, so I bought part 2 with a code for 20% off. I also added O Maidens In Your Savage Season to my order, as I’ve heard really good things about it.

I started the year by playing a lot of Assassin’s Creed: Valhalla, and it reignited an interest in mythology within me. I wanted to read more about Norse mythology so my knowledge wasn’t just formed from Valhalla and Marvel movies. I also bought a book on Japanese folk tales, which was on my Christmas list but actually became really difficult to buy around that time for some reason, but I managed to get my copy on eBay for pretty cheap!

And finally (I know!) rounding off the post with some manga. I bought the latest volume of My Dress Up Darling despite still not having read the previous volume. I wrote a quick review of the first volume and I really liked it a lot, so I’m looking forward to cracking on with it. I also started to buy a new series, The Kingdoms of Ruin. I haven’t read this yet either, but I really liked the general premise and I thought the cover art looked really cool. I’ll write up a review of it when I’ve read it!

A pretty short post this month, but I have a lot of preorders due to arrive in February so the next purchases post should be a lot more exciting!